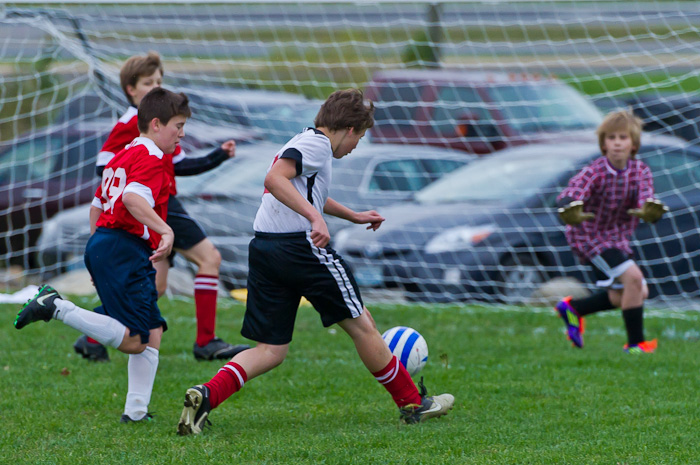 Cameron’s team, Loudoun 9, faced Loudoun 11, one of the toughest squads in their division, tonight. As they took to the field, though, it wasn’t the typical aloofness or tension you might expect from a group of competitive 11-year-old boys. Instead, it was smiles and high-fives as Cameron, Robbie and Bill met up with a team filled with their former teammates from last year, including Alex (39) and Euen (goalie).

As expected, it was a tough game, with both teams fighting hard for the upper hand. Robbie couldn’t quite get the ball past Euen, and in the end it was a defensive battle. Loudoun 11 scored first on a penalty kick, and then Cameron tied the score with a beautiful penalty kick of his own that just soared over the goalie’s hands. As time ticked down, I watched the boys gallop from one end of the field to another, with shots on goal consistently stopped. At that point, my wish came true and the game ended in a tie. They all played so well and were so happy to see one another that it just wouldn’t have seemed right for one team to leave disappointed. Tonight, the Suburban Friendship League really lived up to its name.