This winter, we’ve tried a variety of squirrel proofing for our bird feeders. But, so far, we’ve failed miserably. Each day, a half-dozen squirrels feast on our bird feed and fight and chase one another up and down trees and all over the yard, scaring off the birds.

My favorite feeder isn’t squirrel proof, so my husband took it on as his personal quest to create a barrier to prevent the squirrels from accessing the seed. After purchasing a variety of aluminum and metal pans and sheets, drilling holes and adding various pieces of hardware, he hung each one hoping for the best. Usually, it took some time for the squirrels to figure out a way around the barrier, but eventually they did.

We would start out laughing at their antics, as they hung upside-down, as they slid off the slick metal and dropped into the snow, while they tried in vain to leap from the tree trunk to the feeder. But then our amusement would turn to dismay as we watched them figure out a way to balance on the metal sheets, hang precariously from a nearby branch and swing onto the feeder or grab the slick sides and shimmy down.

Finally, for Christmas I purchased my husband a squirrel-proof feeder, spending a small fortune for one that was guaranteed to keep the squirrels at bay. It worked for maybe a week, until in their angst the squirrels succeeded in knocking the feeder off the tree. Now, slightly damaged, it doesn’t work quite as well, and they’ve figured out just how much weight it will hold before the door closes their access to the seed. 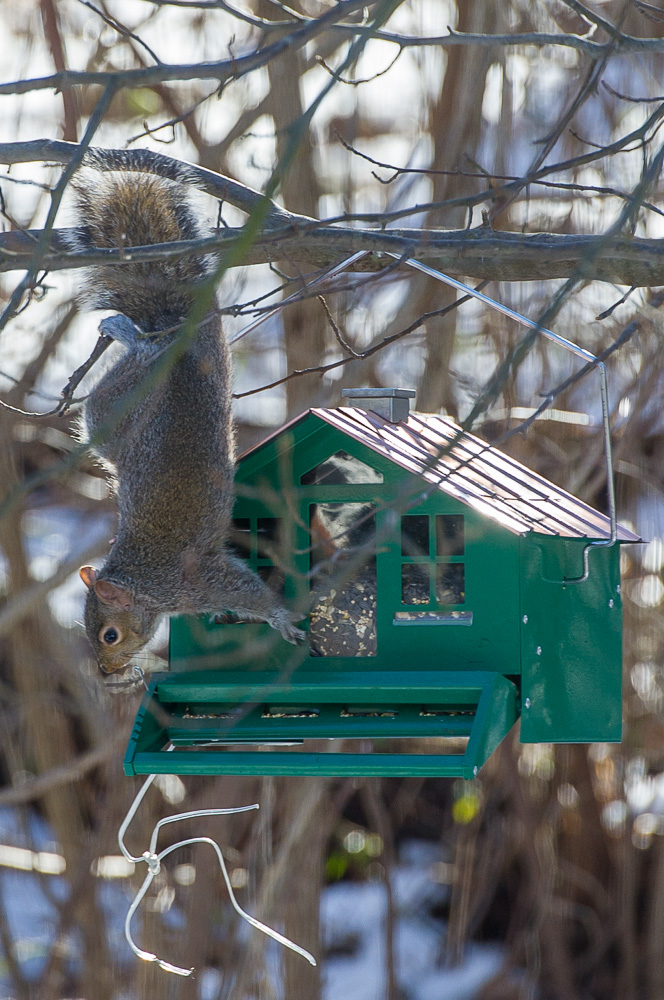 At first, I enjoyed watching the squirrels, but now they’re overwhelming. They dominate the feeders and have even damaged them while the birds sit in the trees waiting for a rare opening. Peppermint has even given up the chase, knowing that she’ll never catch one and no doubt growing annoyed with their chattering and scolding when she strolls around the yard. She’ll only occasionally show some enthusiasm when I open the door if a bold one tries to stare her down from ground level.

Unfortunately, I think we’ve lost this first battle. It’s time to retreat and figure out a Plan B. It’s just a matter of further innovation, adapting our initial ideas and out thinking these small, gray rodents….they’ve pushed us to move beyond the roasting pans, and we’ll take up the challenge!