When Cameron suggested we walk the White Nine yesterday afternoon at the Shenandoah Valley Golf Course, I couldn’t say no. It was a lovely, unseasonably warm November day, and there won’t be many more this year.

So, I grabbed my Fuji X-T10, picked him up at school, and we headed out to the course. Surprisingly, we only saw two other players the entire time we were out, but, as it turned out, the wildlife was abundant. In addition to the resident squirrels, crows and chipmunks gathering food for the approaching winter, we crossed paths with a young red fox. 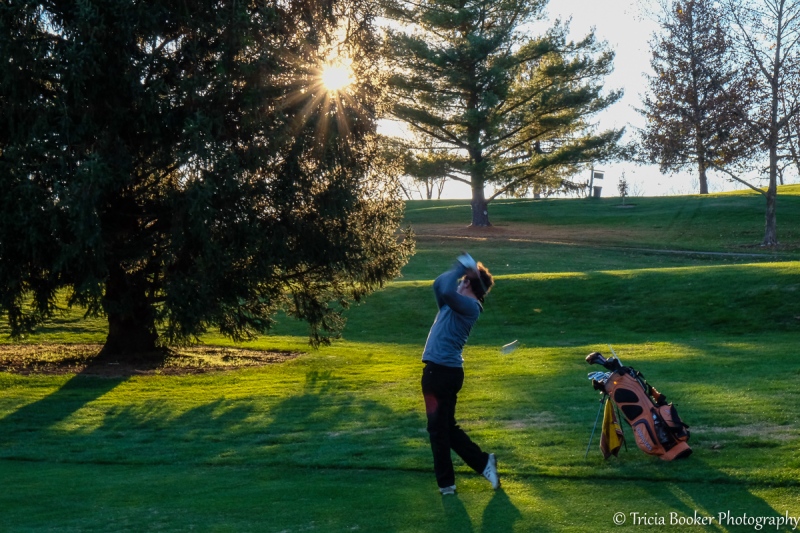 After Cam’s tee shot on the fifth hole, we walked up the fairway toward his ball and noticed a fox trotting out of the woods. As we stopped to watch, it meandered toward us, regularly marking its territory and sniffing around. It finally noticed us, but instead of turning away as I expected, it studied us and then approached.

I crouched down to take some photos, knowing that it would still be a speck with the short 18-55 mm lens I had on the camera. But after a few shots, I realized it was still edging closer, so I quickly changed the settings on the camera from the bracketed .jpgs I had been taking of the fall foliage to RAW, so I could have more latitude in editing and cropping.

To our surprise, the fox was so curious that it began to circle us, all the while marking its territory and stopping to sit and stare. Finally, it walked right up to me, pausing just 10 feet away. It cocked its head at the click of the shutter and then seemed to pose for a moment before turning toward Cam, who was setting up for his next shot.

The fox intently watched Cam hit the ball and then sat down on the fairway just behind him. We turned and continued toward the green as the fox observed us.

It was certainly an unexpected and exhilarating meet up. It was as if we were all respectful of one another’s reasons for being out on the golf course on this fall evening. And while Cam had an additional spectator to cheer him on to making his par, I was able to simultaneously test the Fuji’s low light and wildlife capabilities. It was a win-win for everyone! 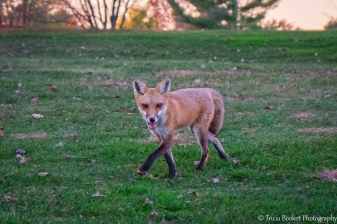